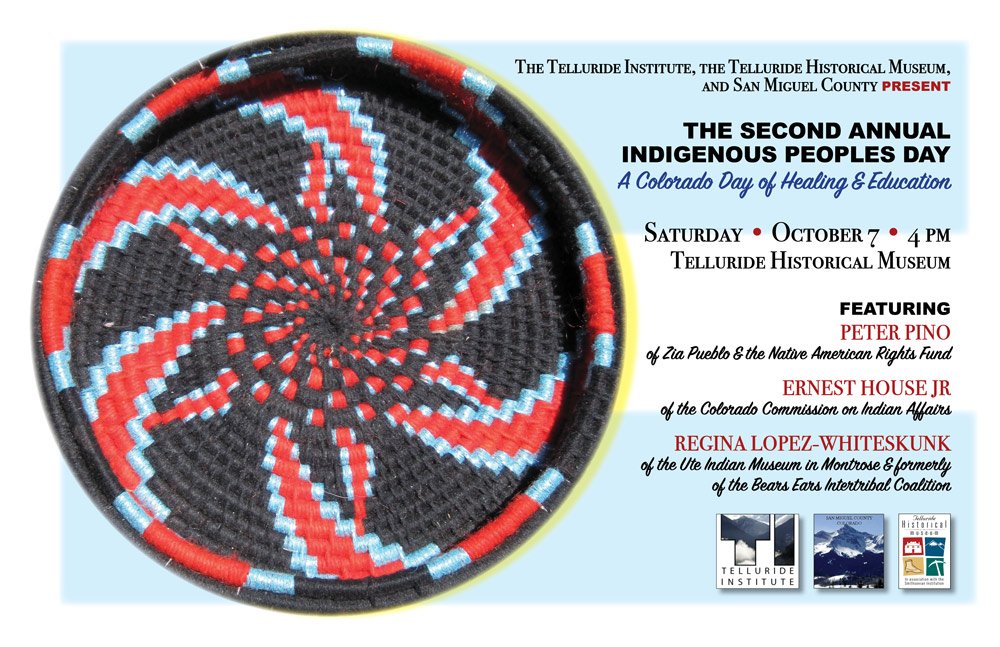 The Telluride Institute’s Ute Reconciliation program hosted the Second Annual Indigenous Peoples Day in Telluride, in partnership with San Miguel County and the Telluride Historical Museum.“Following last year’s successful event, we wanted to continue the process of cultural healing and education that can lead us to a true reconciliation between Native-Americans and Euro-Americans,” said Art Goodtimes, program director.

Peter Pino is a former Governor and War Chief of the Pueblo of Zia. He has a BS in Electronics (1970), a BA in Industrial Arts (1972) from New Mexico Highlands University, and a Master’s in Business Administration (1975) from the University of New Mexico. From 1977-2014, Peter served as the Pueblo of Zia Tribal Administrator and Treasurer. He is a traditional spiritual leader, holding a lifetime appointment as one of the tribe’s Keeper of Songs. He is also a traditional craftsman who tans deer hides and makes moccasins, bows, arrows, digging sticks, rabbit sticks, rock art and bone tools, using the same techniques employed by his Puebloan ancestors. His archaeological interests have led him to committee and board commitments with Crow Canyon Archaeological Center and Mesa Verde National Park. He is also the first Native American to serve as a Commissioner for the New Mexico Game and Fish Commission, appointed by New Mexico Governor Bill Richardson; his term ended in January 2007.

During his tenure as Tribal Administrator Peter presided over the return of more than 56,000 acres of Zia Pueblo Tribal Ancestral Lands re-incorporated back into Pueblo Trust lands from various federal, state, local and private agencies. He was also instrumental in establishing the Ojito Wilderness in conjunction with the U.S. Congress (2005) and the U.S. Bureau of Land Management (2012).

The CCIA is a twenty-five member commission, chaired by Lt. Gov. Lynne and comprised of both Ute Tribes, their appointees and several state department representatives and ex-officio members. Ernest also represents the CCIA at various federal, state, and local public policy meetings and provides legislative and government-related information to community stakeholders.

Ernest is an enrolled member of the Ute Mountain Ute Tribe in Towaoc, Colorado. He previously held the position of Executive Director under Governor Bill Owens and Governor Bill Ritter from 2005-2010. Ernest is a 2012 American Marshall Memorial Fellow, 2013 Denver Business Journal Forty under 40 awardee, and 2015 President’s Award recipient from History Colorado for his great service to Tribes and historic preservation in Colorado. Ernest currently serves on the Fort Lewis College Board of Trustees, the Mesa Verde Foundation, and the Global Livingston Institute. He holds a rich tradition in his position as son of the late Ernest House, Sr., a long time tribal leader for the Ute Mountain Ute Tribe and great-grandson of Chief Jack House, the last hereditary chief of the Ute Mountain Ute Tribe.

Regina Lopez-Whiteskunk was born and raised in southwestern Colorado and is a member of the Ute Mountain Ute Tribe of Towaoc, Colorado. At an early age she advocated for the well-being of the land, air, water and animals. She attended schools in Cortez and has received degrees from Chief Dull Knife College, Lame Deer, Montana, and American InterContinental University, Hoffman Estates, Illinois. She spent ten years in the Information Technology field working for Chief Dull Knife College, the Southern Ute Indian and Ute Mountain Ute Indian Tribes of Colorado.

Regina has traveled extensively throughout the country presenting and sharing Ute culture through song, dance and numerous speeches. In October of 2013 she was elected to serve in leadership as a member of the Ute Mountain Ute Tribal Council. She is a former member of the Colorado Commission of Indian Affairs and the Bears Ears Inter-tribal Coalition, among many other committees and boards.

Regina strongly believes that the inner core of healing comes from the knowledge of our land and elders. Currently she is serving as the Education Director for the Ute Indian Museum in Montrose, Colorado. She is honored to continue to protect, preserve and serve through education, creating a better understanding of our land and culture — a great foundation for a better tomorrow.

The Museum event is free, although donations to continue TI’s cultural outreach programs are encouraged. Two Ute Youth Ski Days are in planning among the Ute Mountain Ute Tribe, TI and the Telluride Ski & Golf, one in December and another in March.

“We could use help from volunteers to provide for lodging and general assistance with ski plans for Ute youth from the Ute Mountain Ute Tribe in Towaoc,” added Goodtimes. “Please contact me at shroompa@gmail.com if you are interested in assisting.”

Started by San Miguel County last year, Indigenous Peoples Day is being provided county funding to match private funding raised by the Telluride Institute and is delegating administrative responsibilities to the Institute this year, in cooperation with the Telluride Historical Museum’s providing a venue. 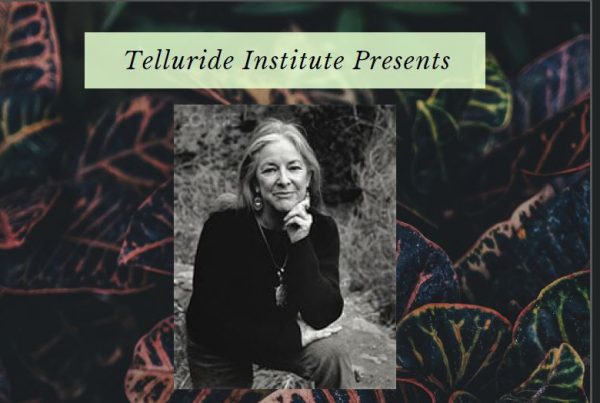 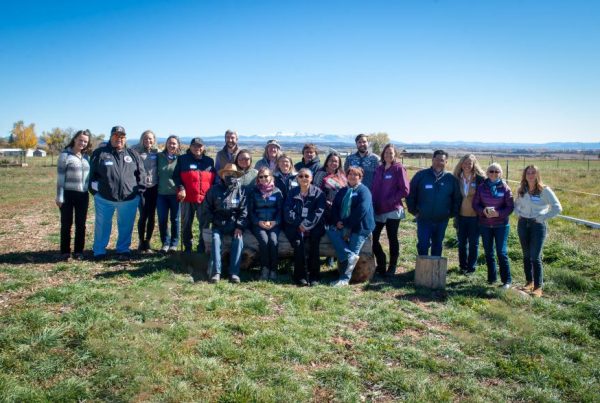 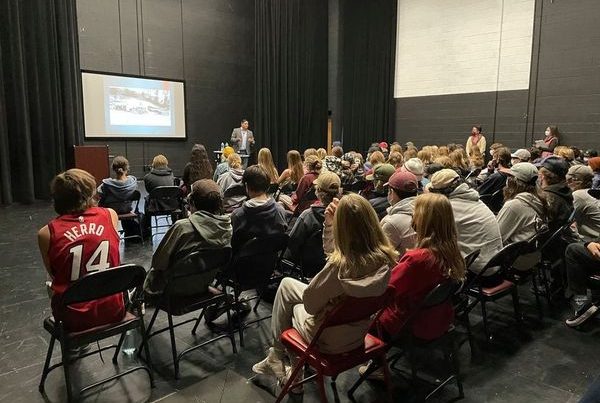