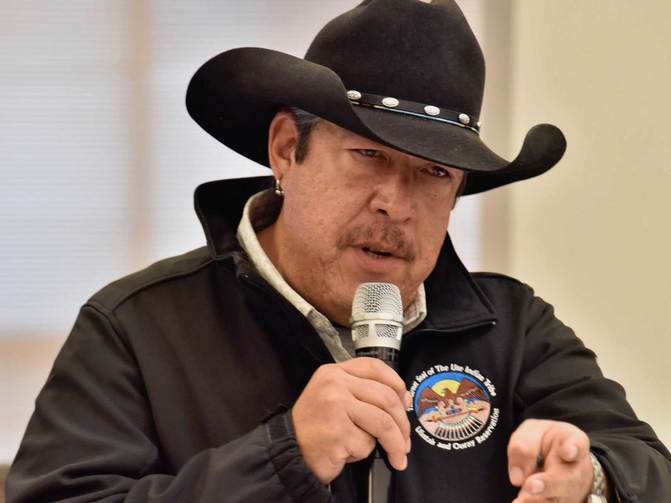 The Telluride Institute is proud to invite local citizens to come to an Indigenous Roundtable at the Wilkinson Library, Wednesday, Jan. 17th at 6 p.m.

Shaun Chapoose, Uncompahgre Ute Representative on the Ute Indian Tribe Business Council in Utah, will speak and entertain questions on all aspects of Ute history and his Tribe’s current situation.

“Shaun and I spoke at the Chipeta Rising celebration in Salida this fall,” said TI’s Ute Reconciliation Program Director Art Goodtimes, “and he asked if he could come to Telluride and meet with local citizens. He wants to help explain how things work in Indian County in the 21st Century, and to field questions by those interested in learning more about the Utes forced removal from Colorado, native sovereignty, legal struggles, tribal lawsuits, Bears Ears and whatever other topics people want to discuss.”

Former Chair of the Ute Indian Tribe in Fort Duchesne, Utah, Chapoose is currently one of two Uncompahgre Ute representatives on the Tribe’s Business Committee. He is descended from the band of Utes that were moved out of the San Juan Mountains at gunpoint in 1881.

His tribe has been fighting a number of legal battles in Utah, trying to preserve tribal rights. And, as a member of the Bears Ears Inter-Tribal Coalition, Chapoose has been a gifted spokesperson, seeking to protect the Bears Ears National Monument from the Trump Administration’s attempts to slash its boundaries and open up thousands of acres to industrial development.

As Chapoose said at a news conference last year, “As Tribes, we will gather ourselves together to continue the fight to save our lands for the future of not just Native people, but all people who connect with these lands.” He lives on the Uintah and Ouray Reservation with his family.

The Library event is free. Donations to continue TI’s cultural outreach programs are encouraged (visit www.tellurideinstitute.org/ute-reconciliation.html). A Ute Youth Ski Day was held last month for kids and chaperones from the Ute Mountain Ute Tribe, and a second ski day is planned in the spring.

“We could use help from volunteers to provide for lodging and general assistance with Ute Reconciliation programming,” added Goodtimes. “Please contact me at shroompa@gmail.com if you are interested in assisting.”

The Institute is partnering for this event with the Ute Indian Tribe, the Wilkinson Public Library, the Telluride Historical Museum, Durfee Day and other local groups as it pursues its Ute Reconciliation goal of bringing Ute cultural programming to town to heal old wounds and provide education for Native-Americans and Euro-Americans alike.

Additional information from Telluride Inside Out.


The Telluride Institute and the Mushroom Committee are monitoring the COVID-19 pandemic closely. At this time, we plan on moving forward with some version of Festival.

This year, there will be a virtual option. As the Festival dates draw nearer into the Summer, we will review the state of affairs and public health guidelines to determine whether there will be a.) hybrid virtual Conference & physical Festival option, or b.) if the Festival needs to fully convert to a virtual format.

Details on fee schedules and programming layout to come in June/July once we have more information to make better informed decisions.

Rest assured, we are committed and excited to be having the 40th Telluride Mushroom Festival no matter what. We appreciate the input and suggestions of our Mushroom Community as we move forward together.

Refund information for the 40th Annual Telluride Mushroom Festival for ALL passes purchased:

REFUNDABLE/TRANSFERABLE POLICY: Early-Bird, Full Festival Passes, and Special Event Tickets are refundable through Eventbrite until 30 days before the Festival begins and transferable for a $20 Fee.

Please Note: Festival Stakeholder Passes ARE NOT refundable and are treated as a donation to the Festival operations and scholarship fund.

EVENTBRITE INFORMATION TO ATTENDEES ON COVID-19